Marathon running is one of the most difficult running distances. The range has changed more than once, and only at the beginning of the 20th century and up to our time it stopped at the mark of 42 km 195 meters. The first athlete who was able to overcome this distance in the Olympic Games was the Greek postman Spiridon Louis. He ran the distance in 2 hours, 58 minutes. and 50 sec. Marathon running is one of the longest in its distance type of sports competition, among the Olympic program and official competitions in athletics.

Running got its name thanks to the Athenian warrior-runner. As a result of the battle between the Persians and the Greeks, the Greeks won. This messenger brought the glad tidings of the triumph to Athens. He ran non-stop for about 40 km. from the Greek city of Marathon to Athens itself. Having uttered the joyful news, he immediately collapsed and died. It was in his honor that this type of running was named. And in 1896, the program of the 1st Olympic Games in Athens included the Marathon for the first time. 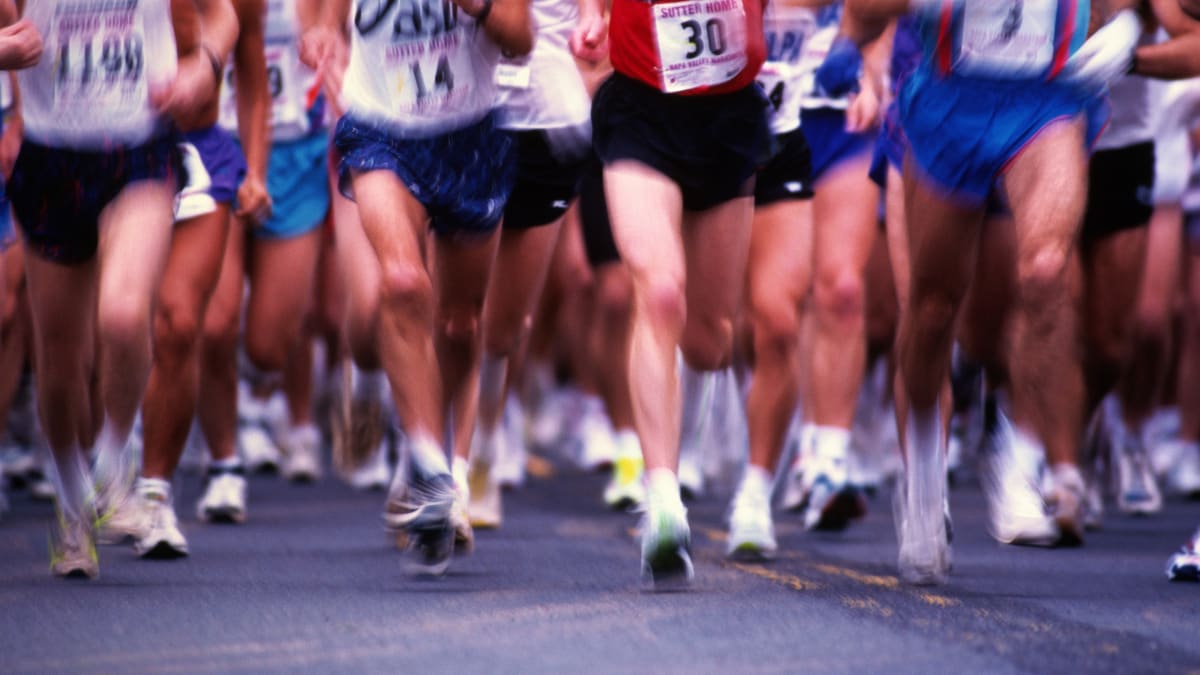 Before participating in a marathon, it is necessary to train for a long time and diligently. Prepare your body and mind for the upcoming load. Every day, the athlete must run at least 12 km for 3 months. Training keeps the muscles in a constant tone, the body becomes stronger, more durable, willpower and patience are developed. Due to training, the load on the cardiovascular system is gradual, which is very important, since the heart also needs to be prepared for the race. In addition to physical training, it is desirable to monitor nutrition, there are foods rich in nutrients.

Athletes who have provided a medical certificate a month before the start of the race, stating that their health condition allows them to participate in the marathon, are allowed to participate in the marathon. Participants run the distance most often on the highway, sometimes along pedestrian and bicycle paths. The start and finish must begin on the territory of the stadium. Clothes, shoes and accessories should be as comfortable and reliable as possible.

Marathon coordinators must ensure complete safety and comfort for the participants. There should be no vehicles and objects that interfere with the athletes in the area designated for the competition. Every 5-6 km there should be food and rest points. Participants can only drink refreshments provided by the marathon organizers. For non-observance of this rule, the athlete may be removed from the distance. Marathon races are held in any city of the world both among men and among women. The length of the marathon, as written earlier, is approximately 42 km.

Training for a successful finish

The start of the race comes from the command “Start!”. Participants approach the starting line, put one leg forward, stop in a step position. At the same time, the legs and arms are in a semi-bent position, the body is slightly bent forward. At the command “Attention!” the weight of the body is transferred to the bent leg, the angle of inclination of the body increases, the race begins. Light acceleration movements of the hands help the athletes to run throughout the distance.

Running distances are logically divided into short, medium and long. The discipline of ultra-long distance running stands a little apart.

Short-distance sprint races do not exceed 400 meters. A variety of disciplines, including steeplechase, can be included in middle running distances up to 3000 meters. To engage exclusively in short-distance sprinting is the fate of professional Olympians due to its specificity. We are interested in long-distance running, which we believe begins after 3 km, or rather 2 miles (3218 meters). However, marathons, beloved by all of us, are not officially included in the category of long-distance running, because they are not held in a stadium, but in the open air. That is why the classic marathon distance of 42 km 195 is called simply “marathon”.

Popular long-distance running events included in the programs of the Olympic Games and the World Championships in Athletics are 5,000 and 10,000 meters. Note that the distances of running events, which are held inside a stadium, are usually measured in meters, while similar outdoor races are measured in kilometers.

When the conversation starts about the beginning of running classes, they are referring to stable running, up to participation in amateur marathons. It is thanks to him that we radically change our way of life and with our feet create excellent conditions for the health of the whole body. Long-distance running is of interest to anyone struggling with excess weight, stress, or strengthening their cardiovascular system and immunity. Sometimes it is called simply. long run